Tracing the origin of Native Seed/SEARCH across political, social, organisational and cultural geographies.

ABSTRACT: Native Seed/SEARCH (NS/S) is a seed bank and non-profit organization located in Tucson, Arizona. The mission of Native Seed/SEARCH is dedicated to conserving the seeds of arid-adapted crops native to the southwestern United States and northern Mexico for the purposes of preserving crop diversity, enhancing sustainable agriculture, and improving food security. Founded in 1983, NS/S was the brainchild of a group of ethnobotanists and archaeologists associated with the University of Arizona’s Arid Lands Studies program. At the time of NS/S inception, the founders were employed by Meals for Millions, a community development organization distributing seeds, including modern hybrid broccoli and brussels sprouts, to local Indigenous farmers as part of a US Department of Agriculture food security program. In the early 1980s, Southwestern farmers participating in the Meals for Millions program began to request seeds they knew to be more suitable for the Sonoran Desert. However, most of the requested varieties could only be sourced from isolated communities of northern Mexico and this posed a problem for Meals for Millions as the organization was only allowed to distribute seeds produced within the United States. In resolving this issue NS/S was born.

This poster presents a visual and textual representation of NS/S’s origins to analyse how the mismatch between national-political, cultural and botanical boundaries gives rise to new organizational forms and ethnobotanical practices. In doing so, the poster reveals how, on the one hand, the US-Mexico international border has increasingly functioned to restrict the circulation and distribution of native seeds, while on the other hand, social and academic networks have worked to erase these limits. The need to transcend multiple boundaries and reshape social networks produced NS/S, a new community seed bank, that, in turn, both joined and influenced the development of southern Arizona’s vibrant native foods culture. 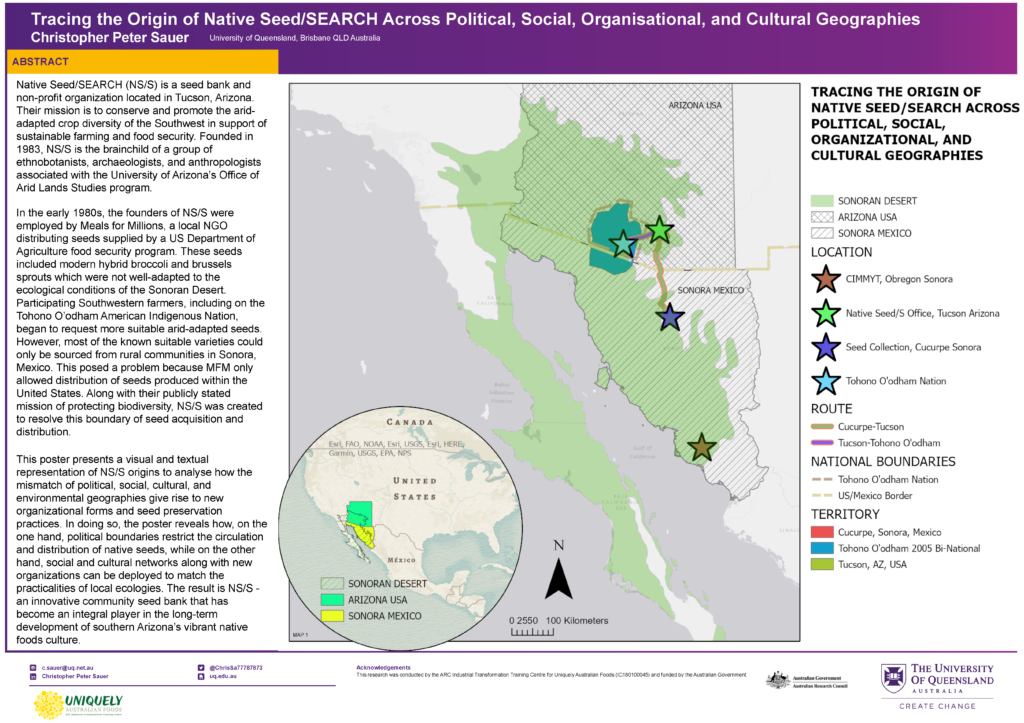