Sweetening the deal without the sugar

Sweetening the deal without the sugar

An exciting time this week for UAF PhD candidate Jessica Cartwright and Indigenous Enterprise partner Michelle On, being featured in The Australian (newspaper, text below) and across ABC radio Brisbane and ABC Sydney! 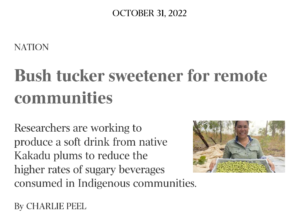 Jess was conducting some early stage consumer testing of her soft drink prototype this week at TropAg (an International Agricultural Conference held this week in Brisbane) when media reps caught wind and whisked the project into the spotlight. 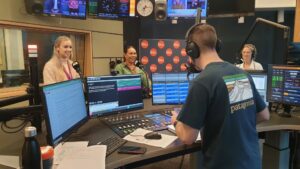 Researchers are working to ­produce a soft drink from native Kakadu plums to reduce the higher rates of sugary beverages in Indigenous communities.

Led by the University of Queensland, the project has the twin goals of reducing high sugar intakes and creating employment opportunities for Aboriginal people.

The Kakadu plum drink has been developed as a cordial that can be mixed with carbonated water to create a vitamin C-rich soft drink with 80 per cent less sugar than a Coca-Cola.

The prototype also contains Davidson plum, another native fruit, and can be adapted to include other commercially harvestable bush tucker such as finger limes.

PhD candidate Jessica Cartwright, who helped develop the drink as part of a team led by Olivia Wright at the Australian Research Council Training ­Centre for Uniquely Australian Foods, said: “Our focus is trying to work with Indigenous ­communities to improve their health and from anecdotal ­evidence we know that having native ingredients in there draws them to the product.

“The other positive is the lower sugar content. That means less calories in, potentially helping with obesity, type 2 diabetes, kidney disease and dental issues.

The drink is made by crushing the plums, which grow abundantly in the tropical north, into a paste. Residue is then removed, leaving a pink, syrupy juice.

The prototype has been taste-tested this week at the TropAg conference in Brisbane.

Djerait woman Michelle On, who harvests wild Kakadu plums on her family-owned cattle property in the Northern Territory, said there was plentiful fruit to enable remote Indigenous communities in the Top End to produce their own soft drink.

“I’ve seen generations who grew up on bush foods and they lived to 80 or 90 years old and were fit, strong and healthy. But with the soft drink, people in their 50s and 60s are very fragile because of their unhealthy lives.”

Ms On said the wild harvesting of the plums would give people in the most remote regions of the north an opportunity to earn a living. “It’s a business that they can maintain culturally and they can keep it,” she said.